The Brownstones at Maywood Park was early in the the rejuvenation and rebirth of housing in Oklahoma City’s urban core. This development of luxury multifamily housing using BuildBlock ICFs demonstrated unique design, energy-efficiency, and disaster resilience.

The Brownstones at Maywood Park

The Brownstones are a hybrid of history and progressive thinking pioneering the redevelopment of urban housing in Oklahoma City.

About The Brownstones at Maywood Park(back to top)

The pinnacle of the elite urban lifestyle is found in The Brownstones at Maywood Park. The Brownstones are a hybrid of history and progressive thinking. As ‘A Triangle Development’ much thought was given to creating the perfect distinguished urban/residential community. The long tested template of high end urban communities being comprised of row houses, or Brownstones, brings the New York feel to Oklahoma City.

Rich components of slate tile, copper, and wrought iron will clad the Brownstone’s unique BuildBlock ICF concrete substructures, along with the finest masonry brick exteriors. The Brownstones embrace “green” sustainable building technologies, will endure for literally centuries with very low maintenance or upkeep costs. These ‘legacy’ homes can truly be expected to be passed from generation to generation.

Maywood Park is the premier section of land located in the 28 acre area just north of Bricktown called The Triangle. Designed as host to the quintessential residential and commercial addresses, Maywood Park offers every essential amenity of an urban lifestyle.

Maywood Park goes beyond “green space”. Maywood Park will comprise the very ‘heart’ of the Triangle, spanning several blocks and will be the epicenter of Oklahoma City’s urban life. The namesake public park, at 3rd and Oklahoma Avenue, will provide a central meeting ground for residents and guests alike.

Every facet of Maywood Park is designed for the reinvention of our city. The interwoven design of residential communities, mixed use developments, and urban estates has reinvented the “social fabric” by creating a tight knit environment for the urban elite. Whether it be the structures several balconies or the pathways twining their way through this urban eco-system, Maywood Park reinvents downtown Oklahoma City by offering the flexibility of an urban lifestyle.

Maywood Park is bordered by Walnut and Broadway Avenue on the East and West sides respectively and extends from 2nd to 4th Street. This four block area will be reminiscent of the ‘town square’ that graced the core of land run era Oklahoma towns and cities.

The Brownstones in Oklahoma City are a fully ICF townhome development.

About the Project(back to top)

When developers wanted to build legacy townhomes which would last for generations and complement their “downtown green neighborhood strategy,” they turned to BuildBlock Insulating Concrete Forms (ICFs).

The development partners were familiar with BuildBlock ICFs and knew from the start that ICF was the perfect choice for the project. This high profile urban project also introduced ICFs to the Oklahoma City in a very high profile way.

The ground-breaking for the first two buildings was November 2006. The height of the project presented a learning curve for the builders. Framing up one floor at a time and bracing the next lift was the most efficient solution. A hydraulic scaffold system allowing masons to raise the walls continuously from the exterior and framers worked simultaneously inside the box.

The townhomes emphasize many design aspects of ICFs: safety, quiet, comfort, and energy efficiency. Rightly or wrongly, Oklahoma is known for its tornadoes and earthquakes so the strength and protection offered by an ICF building was a very important selling point.

The project is designed in a way that every square inch is usable space. The entire exterior envelope and foundation is constructed of BuildBlock Insulating Concrete Forms, including the 12/12 gables. Including the exposed basement, the cottage spans an impressive 38 feet. Completed in three hours, the final pour was completed using the bracing as scaffolding. The read challenge was the remote location of the project as well as the large windows facing the lake. To incorporate multiple views the project had 12 corners. The dining area provided a 360 degree view of the property.

The row houses were designed around the ICF system to maximize the benefit of the load bearing and insulation qualities of ICF. These $1 million homes are located within a few blocks of the main North-South rail line through downtown, so acoustic control properties from outside the homes and between the homes were extremely important.

In Spring 2008 The Brownstones at Maywood Park were chosen as the Oklahoma City Orchestra League’s 35th Annual Symphony Designers Show House. Four of the condo homes were decorated by Oklahoma City’s premier interior designers and viewed by thousands of visitors. This allowed the general public the opportunity to experience the ICF difference first-hand and to connect ICF construction with chic, urban design. In October 2008 The Brownstones were awarded the ICFA Excellence Award in the Large Commercial project category. The project continues to attract national media attention, advancing the message that ICF construction is an ideal partner for sustainable, multifamily structures. 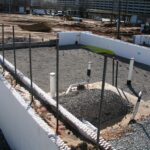 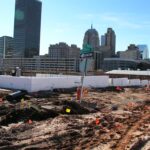 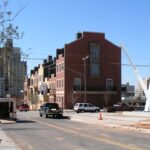 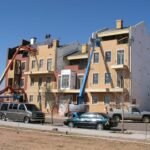 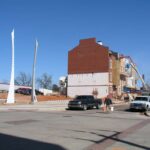 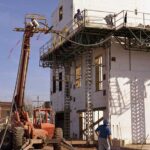 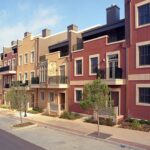 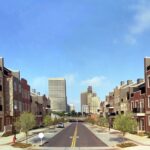 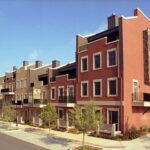 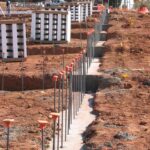 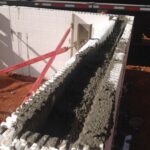 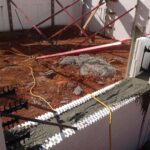 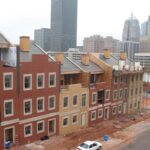 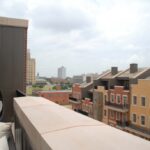 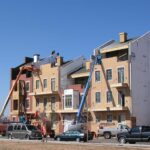 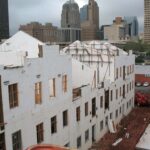 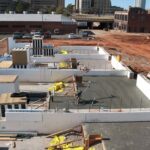 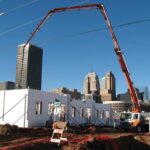 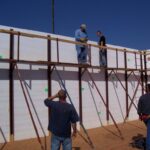 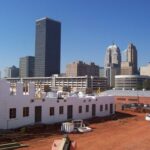 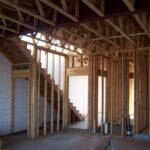 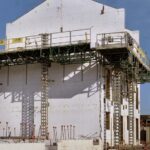 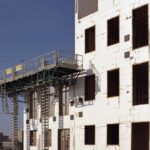