Greater Protection from Tornadoes and Hurricanes

Debris driven by high winds presents the greatest hazard to homeowners and their homes during tornadoes and hurricanes. Recent laboratory testing at the Wind Engineering Research Center, Texas Tech University, compared the impact resistance of residential concrete wall construction to conventionally framed walls. The frame walls failed to stop the penetration of airborne hazards. Whereas the concrete walls successfully demonstrated the strength and mass to resist the impact of wind-driven debris.

Missile testing designed to mitigate property damage losses from hurricanes was also tested on concrete walls. These tests used a criterion of a 9-pound missile traveling about 34 miles per hour. However, hurricane wind velocities will be less than the equivalent maximum speeds modeled in these tests, meaning that your ICF home is ready to handle any hurricane.

Three wall types were subjected to the impact of a 2” x 4” wood stud traveling at up to 100 mph. This is equivalent to the weight and speed of debris generated during a tornado with 250 miles per hour winds. This testing covers the maximum wind speed generated in 99% of the tornadoes occurring in the United States. Wind speeds are less than 150 miles per hour in 90% of tornadoes.
Four walls, three different wall types were constructed to act as the test subjects. Each type is representative of the type of construction now used to build frame homes and concrete homes in the U.S.
The University of Florida Hurricane Research Center used a compressed air cannon to propel the wood stud debris “missile” at the test walls at 75 feet per second. The stud was propelled along its axis with the leading end hitting the wall assemblies.

The frame walls lacked the weight and mass to resist the impact of the wind-driven debris. In each case, the debris traveled completely through the wall assembly with little or no damage to the “missile.” The reason why wood-framed houses don’t provide much protection from debris is that they only consist of drywall sheeting mounted on wooden frames and filled with fiberglass insulation. As a result, none of these materials are nearly as strong as solid concrete reinforced with steel.

CMU walls are stronger than wood-framed walls. However, they were also unable to withstand impact without critical damage. Because unlike ICF walls, CMU walls don’t have steel reinforcement and when struck by the “missile” the concrete blocks broke completely.

The concrete stopped the debris from traveling through the wall without taking any damage at all. In fact, the concrete walls never even sustained a crack, even with a 2” x 4” wood stud fired at over 100 mph. The impact was able to damage exterior finishes but the concrete walls were unscathed. Even the narrowest, 2″ thick section of the “waffle grid” ICF wall was undamaged. 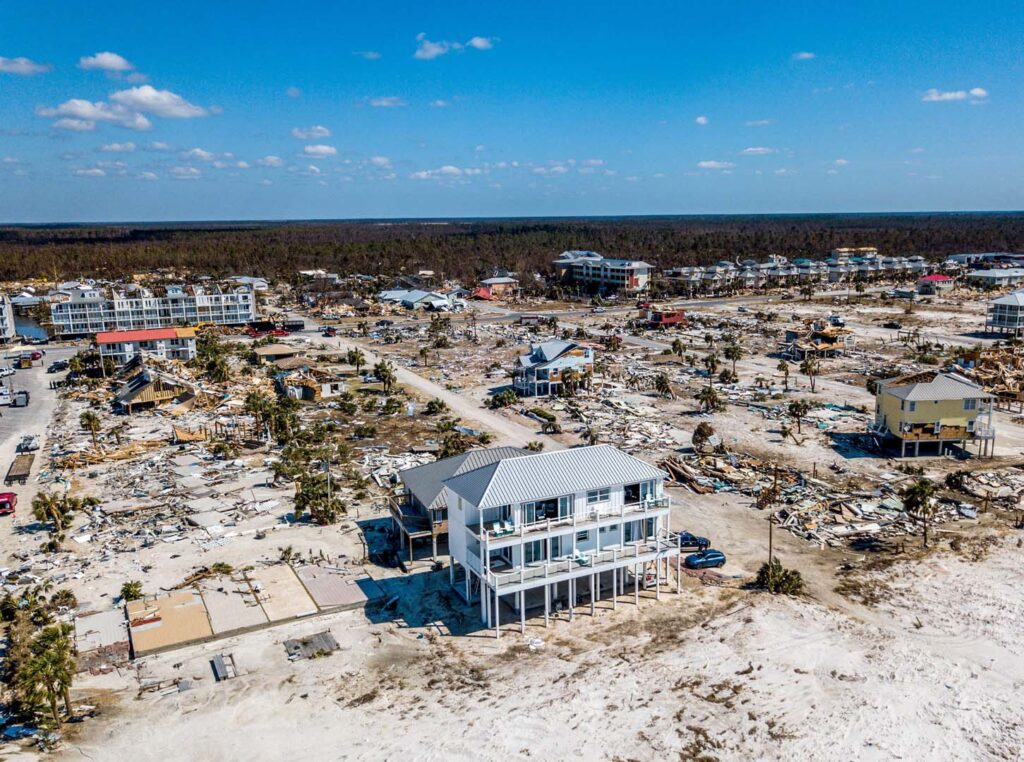 The elevated house that the owners call the Sand Palace, and ICF home, on 36th Street in Mexico Beach, Fla., came through Hurricane Michael in 2018 almost unscathed. Credit: Johnny Milano for The New York Times.