ICF Structures Are Stable, Even in an Earthquake

First, it’s important to identify what makes a building strong enough to withstand an earthquake. The three most important properties for earthquake resistance are stiffness, strength, and ductility.

Optimal design conditions include shear walls that extend the entire height and located on all four sides of a building. The reason being, long walls are stronger than short walls, and solid walls are better than ones with a lot of opening for windows and doors. These elements are designed to survive severe sideways (in-plane) forces, called racking and shear, without being damaged or bent far out of position. Also, shear walls also must be well anchored to the foundation structure to work effectively. Properly installed steel reinforcing bars extend across the joint between the walls and the foundation. This provides a secure anchorage to the foundation.

Scientists study damage from earthquakes to determine what types of buildings best withstand seismic forces. The modern earthquake-resistant design relies on research studies conducted by the University of California Berkeley, Stanford University, the National Institute of Standards and Technology, and the NAHB Research Center. These studies of earthquake damage consistently show that well-anchored shear walls are the key to earthquake resistance in low-rise buildings.

When a low-rise building fails during an earthquake, it’s typically because it didn’t meet the necessary stiffness, strength, and ductility to resist the forces of an earthquake, had walls that were not well anchored to a solid foundation, or both.

Research studies identified which building types sustained the most damage and how the damage was caused. These were the results:

Why Reinforced Concrete is Safe 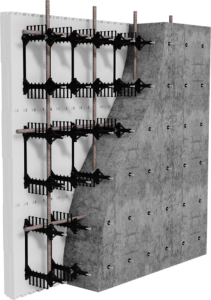 The concrete is cast around the steel bars which locks it in place. The exceptional ductility of the steel to resist tensile forces, coupled with the rock-like ability of concrete to resist compression. This exceptional durability results in an excellent combination of the three most important earthquake resistance properties: stiffness, strength, and ductility. In fact, a study at Construction Technology Laboratories revealed that even a lightly reinforced concrete shear wall has over six times the racking load resistance as framed wall construction.

In the end, it’s no wonder that modern reinforced concrete buildings were found to be earthquake resistant with rarely any significant damage.

Concrete Homes Stand Up to Earthquakes

In an ICF building, the combination of concrete and steel provide the three most important properties for earthquake resistance: stiffness, strength, and ductility.

In conclusion, ICF buildings can be among the safest and most durable types of structures in an earthquake. As a result, homes built with reinforced concrete walls have a record of surviving earthquakes intact and remain structurally sound.