The connection between the footing and an ICF wall is very important. Too often, this connection is omitted from the discussion about reinforcing an ICF wall. There are a number of factors that have to be taken into account. These include the wind loads, exposure categories and seismic zones.

Dowels are lengths of rebar that extend from near the bottom of the footing up into the cavity area of the forms, and are used to control a transverse sliding movement, as well as pulling or tipping movement. A good ICF footing will be at least 11” deep, allowing for 8” of the dowel to be embedded into the concrete (a 4 to 6-inch “L” at the bottom further strengthens this connection). The Prescriptive Method recommends that the dowel then should extend at least 8” from the top of the footing into the ICF wall. The minimum spacing for these is 4’o.c. BuildBlock always recommends 40 bar diameters extending from the top of the footing.

In areas listed with 130 mph+ for 3 second gusts or seismic zones the spacing of these dowels should be tightened to no more than 18”o.c. The length of the embedment into the ICF wall should also be increased to 20” – 24” for #4 or #5 rebar, and align these with the vertical steel. In seismic zones it is further recommended to put a 90-degree bend, 6” long at the top of the wall as well.

It is permitted to insert the vertical steel so that it is embedded into the footing by 8” as an alternative to dowels. This is best accomplished with a monopour or at least wet-set installation, or when using knockdown forms. Other than the monopour, this method will generally increase the block stacking time; the dowel method is preferred.

Lintels around doors and windows should also be installed with the vertical rebar on each side of the opening having a corresponding dowel from the footing, and should maintain the minimum 40 bar diameter splice length. This will ensure that the lintel is reinforced properly. Lintels over 2 feet in width must use rebar extending 24” into the wall horizontally each side.

Saferooms should have dowels placed to match the vertical steel, on 12” centers, and extending into the wall cavity 24”. This is especially important as the loads that the safe room is designed to handle require a deeper foundation and larger footings to prevent the walls from being compromised during a storm. It is also recommended to use an “L” on the bottom of the dowel in the footing, pushed to the bottom of the footing and lifted 3”.

It is important to note, that while the interior slab will prevent the wall being pushed inwards by backfill dirt, it doesn’t control any movement toward the outside of the footing. The backfill, properly graded and compacted, will retain the walls, but having a keyway or dowels in place will eliminate any chances of movement before the backfill is in place.

The goal is to tie the footing to the top of the wall. By doing this, the structure has no weak points and can withstand a variety of forces acting on it. A wind load can be both positive and negative pressure, and can cause forces to be exerted on the exterior or the interior. The more the structure is moving as a unit, the more resilient it will be under load. When the parts move independently, the forces required to damage the structure decreases dramatically, and a failure is more likely. One large advantage of concrete over wood framing, is that the concrete can actually be monolithic for the most part, whereas, wood, being made up of individual boards with fasteners is much more susceptible to independent movement, and will have a lower failure limit compared to a similarly sized concrete structure. In addition, most ICF walls are thicker than the wood frames used even in
upscale construction, and thereby provide additional strength and protection. 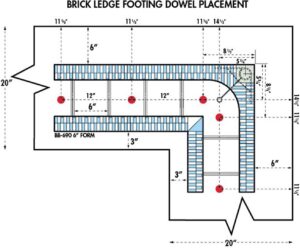 The graphic below illustrates the minimum specification for a footing to ICF wall connection, per The Prescriptive Method. BuildBlock recommends using a hook (either a 90° bend, or a 180° hook) to add to the retention within the footing. BuildBlock further recommends that the dowel extend from the footing by 40 bar diameters to create a full splice connection to the vertical steel.